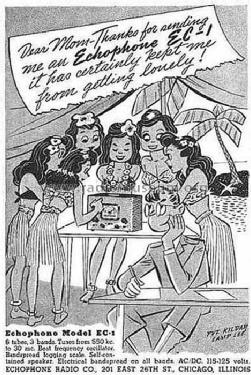 Here it is in all it's splendor and glory, happily playing away on the 49 Meter broadcast band. Spoiler alert: Radio Habana isn't a big fan of our President.

As mangy as this critter looks, it didn't take much to get it playing like new. Actually, I think I spent more time mucking with the dial string than it took to replace all the defective electronic parts! There's something to be said for simplicity.

Now it's on to the cabinet. When I bought the rig, it was missing it's bottom and rear covers, so tonight I fabricated a reasonably correct bottom cover out of 20 Guage steel. Even though it's a simple panel, I spent about an hour measuring and laying out the bends and holes before picking up any tools. The old adage 'measure twice, cut once' applies, though my technique was measure twice, cut once and cut yourself for good measure. No project is complete without at least a little blood letting.

But, the care taken in plannng pays off - it only took a few minutes to fab the panel and it looks/fits like it came from the factory. So, now that it's all working, I get to tear it all apart to prep it for paint!
Side bar: Some of my friends, well, lets just say they don't share my appreciation for these simple receivers. Sure, they're not the most stable or selective, but they work, and work pretty well considering how basic the circuitry is. I think Hallicrafters did just fine designing a solid, entry level receiver that sold for about the same price as a decent tabletop broadcast set.

As for resolving SSB/CW, CW isn't a problem, but SSB takes what Cmdr. MacDonald of Zenith called 'Micrometer Fingers'. It can be done, but it takes patience and, without an RF gain control, strong signals will 'override' the BFO signal. This is true for the EC-1, S-41 and original S-38. Don't waste your time trying with an S-38 B, C, D, E or S-120. The regenerative IF BFO scheme in those sets is all but useless.

Oh, and if anyone's wondering, I'm still working on the SDR-2017-2018, but it's slow going. I am learning this Python stuff, though. Upward and onward. Excelsior.
The EC-1 radios were made by the Hallicrafters radio company, but marketed under their Echophone brand. The EC-1s are historically important because they were manufactured as a 'GI's Radio' and as such, they were marketed to soldiers, sailors, marines, airmen and their families. More often than not, it was the EC-1 radio that our GIs used when they listened to Tokyo Rose, Roosevelt's & Churchill's speeches, wartime news, radio comedies & dramas and the very popular big band music of that era both on the broadcast band and especially on short wave.
They were very extensively used in a semi-official capacity too. Probably every flying field and Civil Air Patrol unit had at least one of these radios because they were cheap, available through the government and worked well at bringing in the shortwave aircraft broadcasts that were used to communicate with the flying field and during search and rescue missions. The reason these radios were so popular is that they were a lot smaller and much easier for untrained operators to use than were the more elaborate military radios of the era. Just as importantly, even small, local radio shops had technicians who could fix them and get tubes and other parts for them. I am sure there were many 'better' military radios that sat unused because nobody knew how to operate them or fix them when they stopped working.
As I mentioned earlier, my particular EC-1 is the 'B' model which went into production immediately after the war ended and in the very month I was born. Although my particular radio was not manufactured during the war years, it obviously had been used in conjunction with operations there at Captain Hancock's flying field in the years immediately following the War and until the flying field was closed in the mid 1950s. It, like so many other pieces of flying field related hardware, was simply thrown on the junk pile after it had stopped working and there was no need for it any more.
The fact is, the post-war 'B' model is a slightly cheaper version of the wartime EC-1, but it does have a noise blanker and, that might be called an improvement over the older model. The thing that cheapened up this model was Hallicrafter's decision to use a movable ferrite slug for its bandspread tuning. I'm sorry to say it, but the ferrite slug tuning is definitely inferior to the capacitor tuning of the earlier wartime model. I spent a considerable amount of time and care adjusting the mechanism of my radio's bandspread tuning and now it works quite well - almost as well as a 'real' capacitor bandspread, but the truth is, the older capacitor tuning system of my wartime EC-1 is smoother and more precise.
The two models have other minor differences too. They use different methods of generating the local oscillator and BFO signals (with Hartley rather than Armstrong oscillators) and they use slightly different types of tubes for the mixer/oscillator and the BFO. The original EC-1 does not have a noise blanker, but the diode section of the 'B' model's BFO tube functions as one. I have found this noise blanker creates a lot of audio distortion on strong signals and so it is useful only when trying to listen to very weak, very noisy signals. These noisy signals are not normally ones you would want to listen to, but during those rare times when you want to pull a weak station out of the noise, it can work quite well. Even though the two models use slightly different tubes and different types of oscillator circuits, both the EC-1 and the EC-1b pull in shortwave signals equally well and both are pretty 'hot' little radios when it comes to pulling in stations. Both models are stable and have surprisingly little drift for such simple radios once they are warmed up. In practical operation, there is really no difference between the EC-1 and the EC-1b radios.