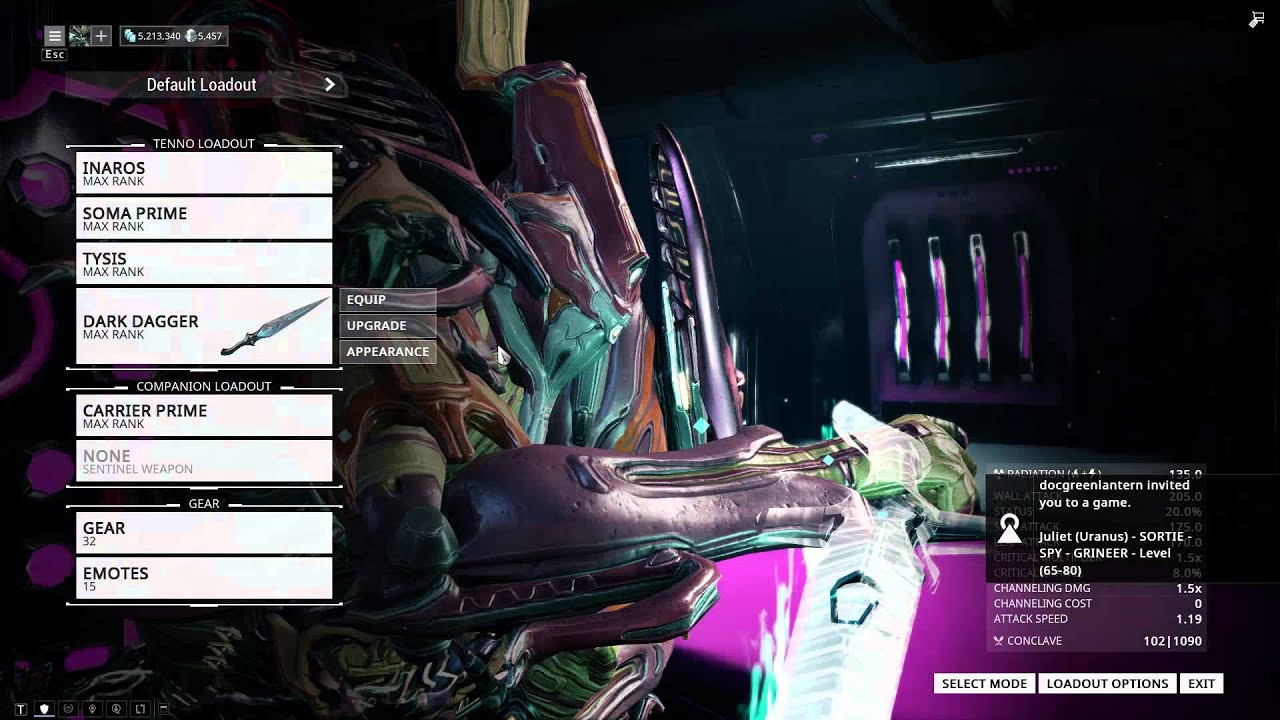 Sands of Inaros is an optional Quest introduced in Update 18.5, involving Baro Ki’Teer’s interest in the hidden treasures underneath Phobos. Completing this quest will reward the Inaros Warframe.

Before we start talking about the different Ivara builds, we do need to find the best build for her Warframe weapon, called ‘Artemis Bow‘.But to be fair, building this weapon is pretty standard, because you do use two elemental mods of your choice, a high amount of multishot and of course Serration, Point Strike and Vital Sense – which is the usual mod selection for bows (and lots of. So, im a beginner, still MR7. I started a few weeks ago, and i started with Excalibur, then chaged to Rhino, and now Inaros, and im really loving to play with Inaros. His story was cool, his sand abilities are awesome, his frame is good looking, and his health is beautiful. But, i want to play him efficiently, higher levels and etc. Like a one hour survival Solo on Derelict (i. A few days ago I published an article about a build I’d come up with in the first few days of the Necromancer’s launch in Diablo 3 that I said “broke the game” for me. It was a pet-based.

To unlock the quest, players must first purchase the quest blueprint from Baro Ki’Teer on Saturn, Kronia for ‍ 200 and ‍ 50,000, and then construct it in the Foundry under the Keys section. The blueprint can also be traded between players.

Upon claiming the item, the Quest will appear in the World State Window under the Quest tab, where it will then prompt players to see a new inbox message from Baro Ki’ Teer, which will start off the quest proper.

Baro explains that Phobos was a desolate backwater colony, which used to be the home of the ‘sky worshipers’, a group of colonists that the Grineer exterminated in the past. Despite this, the relics left behind became valuable antiques, and thus the object of interest for Baro. Players must fight through a small contingent of Infested as they proceed.

The Tenno soon reach a temple carved on the side of a mountain, where Baro scoffs his disbelief at the stories of the ‘God King’ called “Inaros”. As the Tenno explore deeper inside a disembodied female voice begins to narrate a story to her child about the ‘Golden Skymen’ – presumed to be the Orokin – who would abduct people from them, until the arrival of Inaros. The voice unnerves Baro, who can apparently also hear it speaking, asking the Tenno to stop it.

At the end of the temple path lies a large chamber with a shrine of the God King, where a large jar – the Sacred Vessel – lies at its feet, which players must take. Baro preemptively placates the Tenno by justifying the taking of a burial vessel as creating riches instead of defiling a tomb, and orders them to extract.

The blueprint for Inaros is rewarded at the end of the mission.

On returning to the ship, Baro exclaims his surprise at the inscriptions on the vessel being a blueprint of sorts, and wonders if a Warframe was entombed there. He then reads an inscription on the vessel, which suggests that they may need to defeat an enemy in order to fulfill its condition, and suggests carrying the vessel into battle.

For this part of the quest, players must kill a number of the specified enemy that is represented by the glyph on the vessel, while the Sacred Vessel is equipped in the player’s Gear inventory. Upon killing an example of the correct enemy, the screen will momentarily flash with the Warframe’s energy color, accompanied by a distinct guttural sound.

There are three types of enemies that can be designated by the glyph – a Corpus, a Grineer, and an Infested type – which will be different between individual players. The enemies associated with a particular glyph, as well as the required number of kills, are shown below: 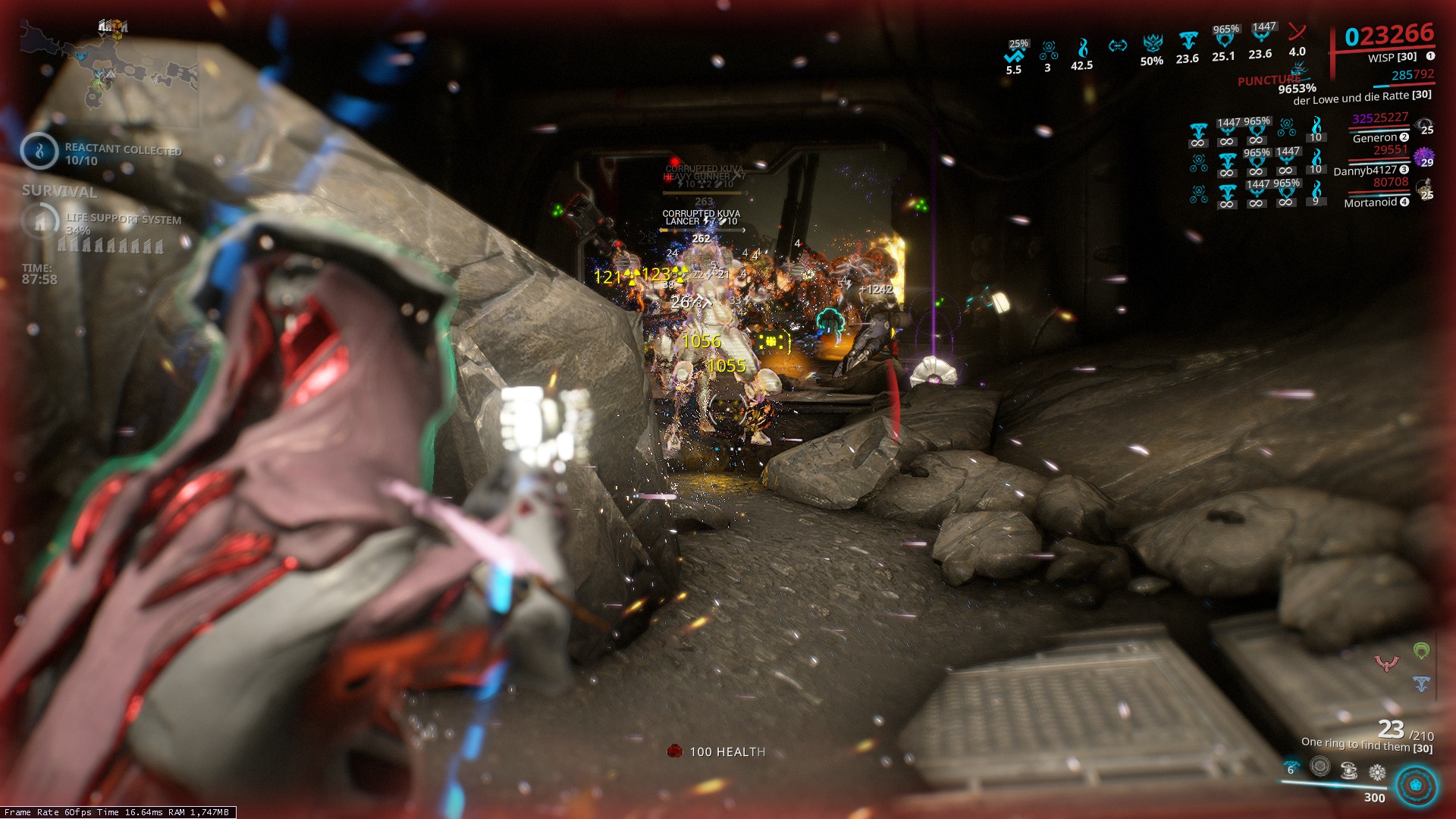 Once the required number of kills of the specified enemy has been made, Baro will instruct the player to return to their ship to further examine the vessel, where they will find the vessel’s glyph now glowing. Players must then return to the temple in Opik, Phobos to return the vessel.

From the main shrine chamber, players must proceed to a designated door where they must lay down the Sacred Vessel, which will cause the door to open, and reveal another Sacred Vessel at the center of the room inside. Upon players taking the Sacred Vessel in the room, the female narrator from the previous visit continues the story, revealing that Inaros was once a warrior of the ‘Golden Skymen’, until he could no longer withstand the abductions taking place, with the latest one being that of a child. This culminated in Inaros killing the child’s abductors and returning him to the colony, after which Inaros ‘ascended’ to watch over the colony as their King. Unusually, Baro becomes unnerved the more he hears of the story, asking whether the story might be true.

At this point a large number of Feral Kavats will attack, which players must eliminate before they can proceed. After the last Kavat is killed, Baro nervously asks the player to return to their ship.

Completing this portion of the quest rewards the blueprint for Inaros’ helmet, labelled as the “Protector” helmet.

Baro now believes that the story of Inaros was drawn from an actual Warframe, and once more tasks the player with completing the challenge of the second vessel. Identical to the previous challenge, players must carry the Sacred Vessel in their inventory and kill the required number of a specified enemy.

Depending on which faction of enemy the player received in the previous challenge, players will be assigned a target from the same faction as their second challenge, of which the available types are shown below:

When the challenge is again completed, Baro will once more tell the player to go back to Opik to return the second vessel. This time however, the Grineer will be present in place of the Infested, whereupon Baro panics at their presence, seemingly calling out to Inaros for protection, and now wants to hear the rest of the narrator’s story.

As before, players must find the designated door and deposit the second vessel in order to collect the third one. The narrator continues her story, where after years of peace, the colony was set upon by the Infested, which nearly wiped out the colonists in spite of their prayers to Inaros. With the end seemingly in sight, the surviving colonists were once again saved by Inaros via a sandstorm that eradicated the Infested, but at great cost to himself. The colonists took Inaros’ battered body and hid its parts among the four Sacred Vessels to hide it from thieves and raiders.

The central shrine will now be occupied by a single hostile Tomb Guardian, essentially a gigantic stone Rumbler, which players must defeat. Destroying the Tomb Guardian will make it spawn into numerous smaller versions of itself, and each of these in turn will spawn more, smaller copies of themselves upon being destroyed. This process will repeat at least 2 more times before the Tomb Guardians are finally destroyed.

Baro seems distressed and emotional at this point and is eager to find out more about Inaros as he asks players to return.

Inaros’ Chassis Blueprint is rewarded upon completing the mission.

Upstate ny serial killers. With Baro now believing that the story might be true, he once more asks players to prove themselves as Tenno by completing the third vessel’s challenge.

With conditions identical to the previous two challenges, players must kill their third enemy type. Unlike the previous challenge, the third enemy will be of a different faction from the preceding two enemies. The glyphs and their corresponding enemy are as follows:

A distressed Baro now pleads to the Tenno to save Inaros as the Grineer have caught wind of the Tenno being in the area, and he claims that he isn’t in it for the money anymore. Like before, placing the vessel by the door will open it and a final vessel will appear in the center. Taking it will cause a Tomb Protector to appear, which is essentially a copy of Inaros who will use a Mutalist Cernos as well as its normal abilities. Defeating him will cause it to cover itself in a sarcophagus where it cannot be harmed, and this will cause one of the giant statues in the main room to come to life in the form of a Tomb Protector Effigy which takes the form of Inaros wielding a Lesion weapon. Defeating the Effigy will make the Tomb Protector rise again and summon a Sand Shadow resembling the player while doing so, and this process is repeated until all of the Effigy giants are defeated, and the Tomb Protector is finally able to be destroyed.

In the conversations leading up to and after the battle with the Tomb Protector, it is revealed that the child being spoken to by the disembodied voice is none other than Baro himself, and the voice was his mother’s. The final narration sees the mother hide Baro away, telling him to pray to Inaros as the Grineer ultimately kill her, and the rest of the colonists. Baro explains that he had long tried to forget those events, and that the Tenno have made him remember his true reason for seeking out the treasure. With the components in hand, Baro tells the Tenno that Inaros will rise again.

Completing the quest will reward the final component for Inaros, the Systems blueprint. 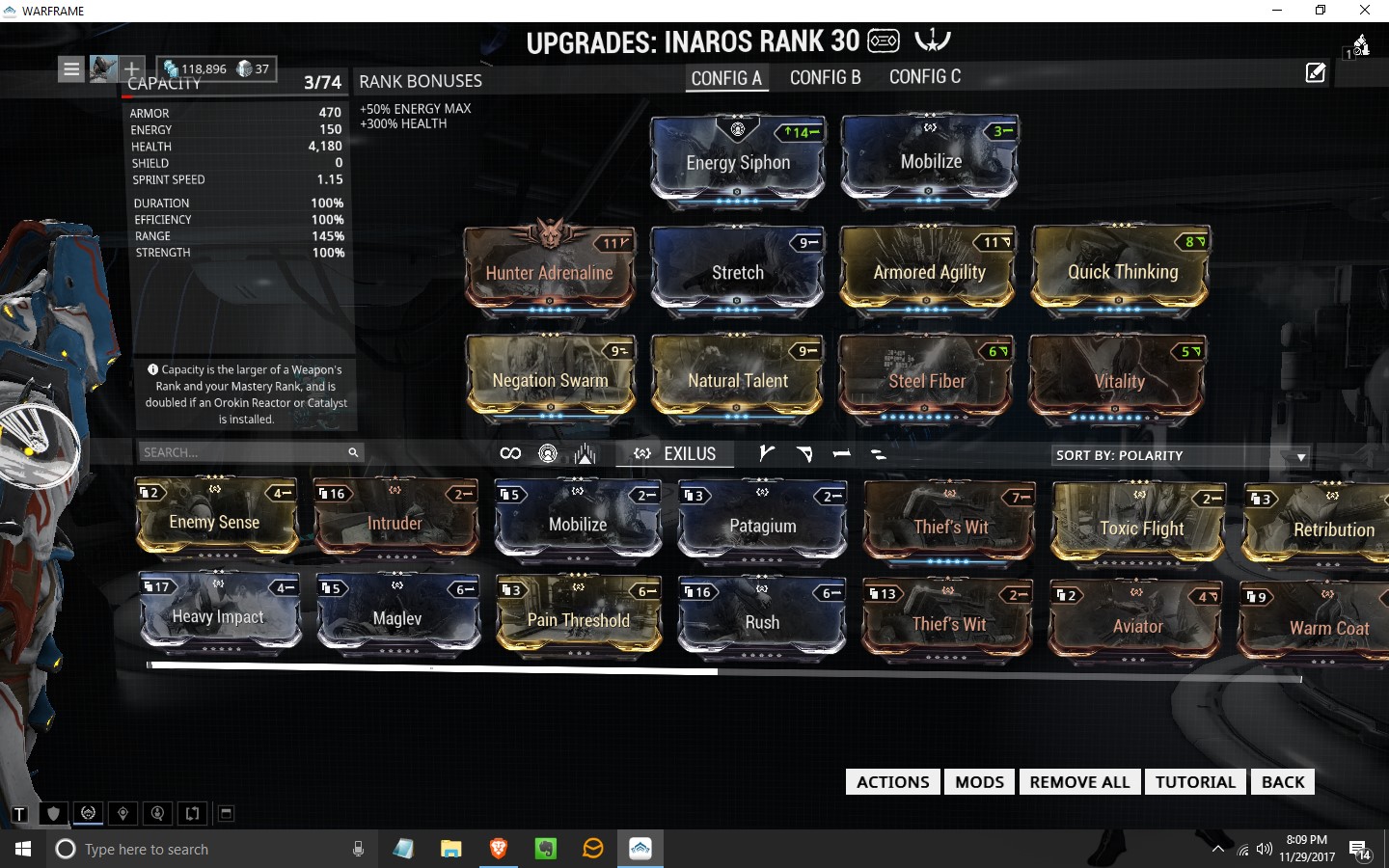