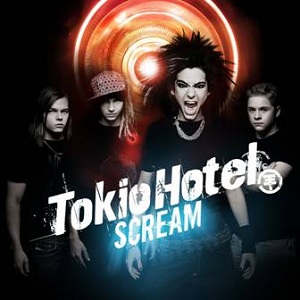 Tracklist
01. Scream
02. Ready, Set, Go!
03. Monsoon (Gateway Version)
04. Love Is Dead
05. Don't Jump
06. On The Edge
07. Sacred
08. Break Away
09. Rescue Me
10. Final Day
11. Forgotten Children
12. By Your Side
The members of Germany's Tokio Hotel started their careers when they were in their early teens, and while they still look youthful on their album covers, they've obviously grown since their 2005 emo/punk-pop debut, Schrei. Comprised of translated versions of songs from Schrei and Zimmer 483, their English-language debut, Scream, opens with the title song and immediately highlights the most obvious change the band has undergone -- that of puberty. Fortunately, the lowering of lead singer Bill Kaulitz's vocal range (and subsequent lowering of the album's pitch) has not diminished the songs but enhanced them, bringing depth -- no pun intended -- and power to his work that was previously lacking. Tokio Hotel may have lost a bit of the innocent tone that endeared them to their early fans, but it has been replaced with a stronger, more assured sound that is just as appealing. That said, there is an interesting dichotomy that takes place on Scream -- while Tokio Hotel are growing up, they aren't grown up. The sound is polished and the melodies catchy, but the lyrics veer toward melodrama, especially on tracks that deal with social issues such as 'Don't Jump' and 'Forgotten Children.' There's also a problem concerning the band's overall musicianship. While the performances from each of the members are solid, there's nothing exceptional or particularly inventive that takes place on the album. It could be a turn-off or disappointment for those hoping that age would give Tokio Hotel a rougher edge, but it's nothing to fault the band for. Despite the occasional misstep, Scream shows that the bandmembers are ready and able to embrace their growing abilities.